Whilst we Welcome Two New Students from Fiji, we Pay Tribute to Those who left last year

Thoughts from the Headmaster

When Mr Matthew Robinson introduced the opportunity to forge links with Fiji, I saw the chance to make a real difference for young people from a different part of the world while enriching the school, its staff, and pupils. At no point could we imagine what was about to happen and the deep impact these young men would have on our lives.

The school was ready to welcome these boys but how would they respond. The difference in language and learning was stark and difficult for them. But it was the difference in culture that proved most overwhelming. While outstanding on the rugby field it was their humble sense of service that won the hearts of many and as they became heavily involved with various school activities it was warming to know that West Buckland was central to their prayers.

Like any good relationship it is what happens when times are hard that counts and so it was when Covid hit, and the rugby stopped. With plans in disarray Matthew Robinson worked hard to secure a pathway beyond school for Josh and Tora while the boys diligently approach their TAG exams. Their impact is described here by Matthew and my thanks to him and all the staff and pupils who have played their part in this transformational story.

My lasting memory of them is the humble way they received their prizes on Speech Day. My lasting hope for them is happiness.

They have changed my life - Mr Robinson, Head of Boarding and coach of the First XV rugby

These two young men joined us in September 2019 looking to gain a new experience that would hopefully change their life. Rugby was the main driver for this, and they instantly made a huge impact to the West Buckland 1st XV. This was not only in the physical sense but also spiritually and with the level of professionalism and commitment they brought. 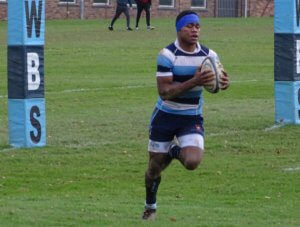 As Head of Boarding at West Buckland School, in the time they have spent with us through the COVID -19 Pandemic, I would say they have changed my life. I do not believe that I have met a more humble and grateful pair of young men. Despite their obvious capability on the rugby field, both boys have impacted the school in other ways.

They have been stalwarts in attending the small Sunday service that we have initiated with the boarding community. The fact that these two ‘rugby boys’ could have such faith has afforded those others less confident in this aspect of their life the strength to be included.

My colleague Angus Calder writes: “I was personally almost brought to tears watching them receive their OWBA hoodies in the Memorial Hall. They got to their knees and prayed for the school in front of their whole year. The emotions were equally powerful when they regularly prayed before and after matches with their teammates.”

In my role as 1st XV coach, I remember being asked by Tora & Josh if they could initiate this practice. I empowered them to have the conversation and pose the question to their teammates. It was sobering to witness this conversation between young men. I have spoken with the teammates, and they have said how they felt the togetherness that this practice brought them. The peer group and others recognised their humility and gentleness in every interaction except those that required the physical need as expressed during their rugby and training endeavours. This ‘way of being’ has earned the two Fijian boys great respect among their peers and staff alike.

Other staff have been suitably impressed with their engagement. They have sung songs, painted drawings at different times and generally got involved with their peers and the school as a whole. Their will to volunteer their services and assist in the Outdoor Education department has been welcomed and they have been consistent in their effort to support this section of the school. This culminated in them winning the Outdoor Education prize on Speech day.

What other staff have said

Mrs Karen Morgan writes: Both boys were quiet students but demonstrated their respect for education through their diligence and politeness.  They certainly did not have a GCSE background but embarked on a level 3 mathematical qualification, which involves problem solving and decision making at its’ core. I have never worked so hard with two students to get them through a course, but I worked hard because they worked hard and at no time did I ever feel that they did not appreciate my time and effort with them. They listened and responded and turned up regularly every week to supplement their lessons and it paid off.

Mr Darren Minns writes of Josh: “Josh has been a real pleasure to have in this class and he came to this with no prior experience. He has shown a few of the pupils in the class that with determination things can be achieved…. Josh has always helped others and he has built up a
reputation for being reliable and dependable and he is always the first to offer help to his peers as well as staff. I personally think that he has enriched the class with his insight into different cultures.”

We are delighted to welcome Vilimone and Semi, from Fiji, to West Buckland this term and we hope that they enjoy their time in the Sixth Form and enrich the school in the same way that Josh and Tora did.  We’re sure that the school community will extend a warm welcome to them.