The Queen’s theatre in Barnstaple rocked for three nights as the senior production of Legally Blonde blew the audience away in a delightful explosion of pink pom poms, preppy interns and puppy dogs! 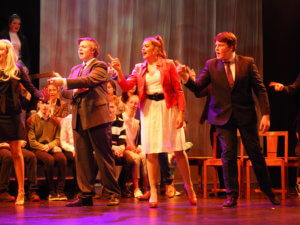 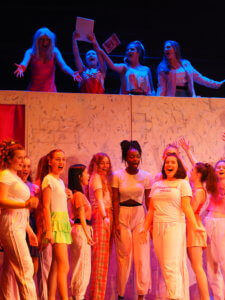 This year’s musical production of Legally Blonde was an outstanding success, featuring a full cast from Year 9 students and above, who performed for three nights this week at the Queen’s theatre in Barnstaple.

The choruses and accompanying dance routines were slick, highly energetic and infectiously catchy and the chorus threw themselves into every high kick, hip wiggle and gymnastic move. It was impossible not to feel uplifted and slightly exhausted in equal measure!! 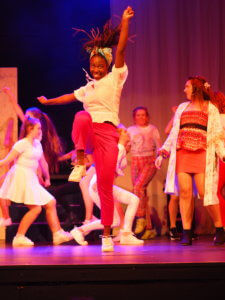 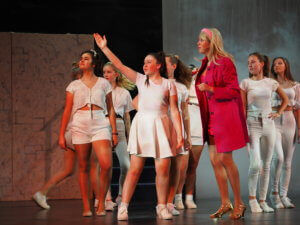 The show features some great characters and there were some notable individual performances. None more so than Olivia Roscoe, who played the main character, Elle Woods. Her stage presence and quality of acting and singing, were outstanding and her portrayal of the fashion-obsessed, love-blinded cheer leader-come-lawyer was delightful. There were numerous other memorable performances, well done Maddy Brent, who played lovelorn Paulette Bonafonte, Charlie Pocock who was a convincingly ruthless Professor Callahan, Elena Espinosa-Cabrera as the accused  Brooke Windham and Will Stevens as ‘chippy’ associate lawyer, Emmett Forrest, amongst many others.  And who can forget the UPS man?! 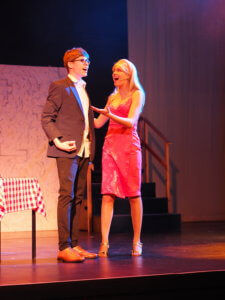 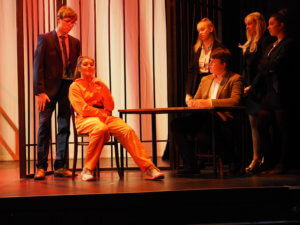 No performance can ever be successful without the support of a large and dedicated crew. Many congratulations and thanks must go to Emma Kent and her amazing team who choreographed, coaxed, clothed, miked-up, made-up, rehearsed and transported week after week and night after night.

Also, we must not forget to mention Dom Carter and his fabulous band, featuring our own students Max Lo and Ben Lee, who raised the production to an extra level.

This was a triumph and all involved should be very proud. West Buckland’s reputation for outstanding music and drama productions is well and truly deserved!