Awards and trophies for some of our outstanding boys

We love nothing better than celebrating the varied and wide-ranging achievements of our students inside and outside school, so this week we are proud to showcase some of our boys doing what they do best.

Max Woosey in Year 7, who has become known as ‘The Boy in the Tent,’ has been awarded the Spirit of Adventure Award in the Daily Mirror Pride of Britain Awards. Max has spent 19 months sleeping under canvas so far to raise money for North Devon Hospice, even sleeping on the hotel balcony when he stayed in London to collect his award! Max is very amazed and grateful that people nominated him and said that he thinks that North Devon Hospice is the true hero of this story. 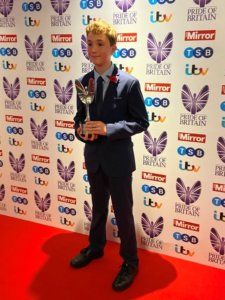 Max is not just a Pride of Britain winner: he has also won a very prestigious award as the Bear Grylls Chief Scout Unsung Hero, for his incredible fundraising achievements. Additionally, he has been presented with the Amplifon Award. This fundraising challenge was inspired by the gift of a tent from a friend who was cared for by the Hospice, which gave Max the idea for raising money to support the Hospice during the pandemic, when fundraising opportunities were reduced for most charities. Family friend Rick Abbott gave Max the tent and told him to ‘have an adventure’, which inspired Max to do a sponsored camp-out to raise money for the North Devon Hospice which cared for Rick in his final weeks.

Max’s total is now at a breath-taking £559,260 and he’s still sleeping out. Max is determined to keep sleeping in the tent, and has roped in Digby the dog for extra warmth during the winter months! 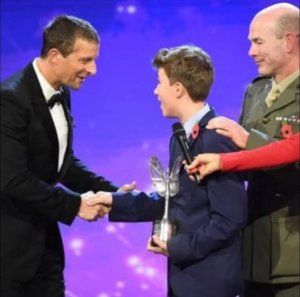 The adventure continues, with the family having to find somewhere to pitch a tent whenever they are away from home. So far, Max has put the tent up at 10 Downing Street and London Zoo! We think that Rick would agree that the tent has inspired a fantastic adventure. Well done Max, we are very proud to have you in Year 7.

Year 13 Dan Mock competed last month at the Men’s British Gymnastics Championships in the Under 18s category. Dan came 4th on the Pommel Horse, 6th on floor, 8th on vault, and 11th overall. Well done Dan, this is a fantastic achievement. 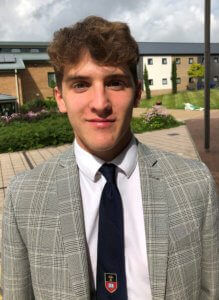 Congratulations also to Henry Gill in Year 6, who represented West Buckland in the first Gliddon and Squire cross country meeting at Westward Ho! on October 17th. coming second overall.  He only missed out on first place because he tripped over at the end!

Rodrigo Anzules-Argote (Year 10) continues to go from strength to strength with his tennis. Recently, he played an Under 18s Grade 4 tennis tournament at Atlantic Racket Centre and won the competition. Well done Rodrigo!