James has been on tour with Devon County U15 cricket team for 16 days. The team played 6 matches including two 2 day matches and a day/night match. Here James tells us about his once-in-a-lifetime trip.

The Kruger National Park, Cape Town and the whole South Africa experience was even better than I could have imagined. In fact it was simply awesome.

We left Devon with temperatures around two degrees and 18 hours and 6,000 miles later we arrived in Skukuza capital of Kruger National Park to temperatures of 35 degrees and humid! Our hard work during winter training sessions proved essential to ensure we were fit to play competitively in these sweltering conditions. 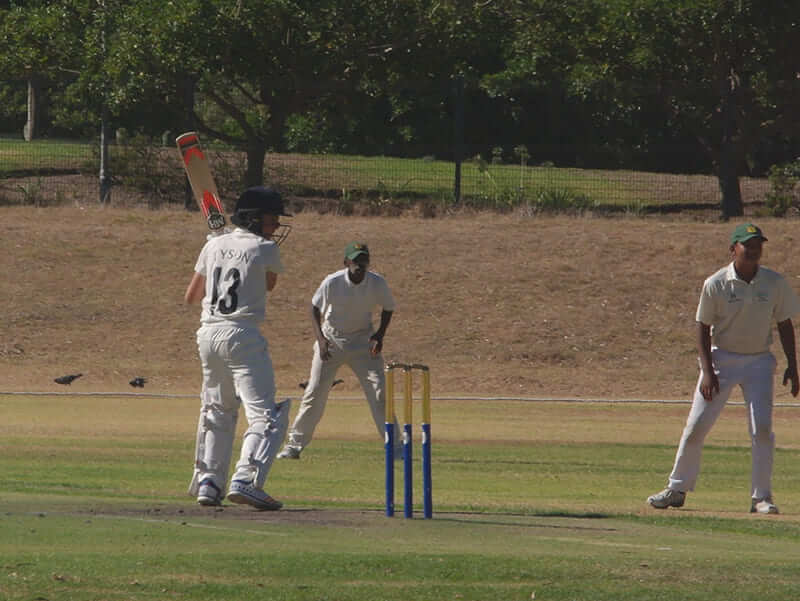 After winning our first game against the JRA Academy XI we enjoyed a fantastic game drive in one of the largest game reserves in Africa. To see the cheetahs, lions, elephants and other wild animals up so close was amazing.

After winning all of our fixtures in Kruger and, most pleasingly, the ‘Battle of the Kruger’, we headed off on the next leg of our tour, flying to Cape Town and I had my first experience of a day/night game played with a white ball under floodlights. The white ball was very different to the red ball and it was hard to pick out of the floodlights. We were all a bit bemused when this game had to be abandoned due to a thunderstorm because there had been a three-year drought in Cape Town up until this point – we roll up and it rains! But we realised it was very important for the locals. However we still managed a win under the Duckworth-Lewis method.

For our next match we played Newlands Cricket School in the shadows of the Football World Cup Stadium. After this game we went up to the top of Table Mountain and watched the sun go down over Cape Town.

We visited Newlands Cricket Ground early the next morning for a team photo and it was easy to see why it is described as one of the most beautiful cricket grounds in the world, being overlooked by Table Mountain and Devil’s Peak but surprisingly the playing field was not as big as I had expected. There have been 55 Test matches played here and it is home the National South African team whose nickname is The Proteas.

We played our match this day at Western Province Cricket Club and here the groundsman proudly told us how India had played on this wicket two weeks previously. We were expecting it to be an absolute belter so were a little disappointed when we found it to be pretty average. However it was the most stunning ground I’ve ever played on with the backdrop of the iconic Table Mountain, and we performed well and came close to winning but they held on for a draw.

We were then taken on a tour of Langa Township, a suburb of Cape Town and it was noticeable how everything was all very clean and well organised in the homes and how happy everyone seemed. Langa has produce some prominent South African sportsmen including wicket-keeper Thami Tsolekile.

A lesson in cricket!

For our final game we received our biggest cricketing lesson! In a 50-over match we bowled WP out for a respectable 243 but lost by 181 runs as we were demolished by an amazing spell of fast bowling from South African Salmaan Ajam who took 7 for 9 in 5 overs! Afterwards our hosts provide us with a delicious braai (BBQ) which we all enjoyed together.

We donated and brought from home four bags full of kit which we gave to young cricketers who needed kit.

I would like to say a huge thank Mark Ansell, Tour Manager, all my coaches and everyone who has generously supported me and made it possible for me to be part of this amazing cricket tour; I will remember it forever.